Green Flash - A reference found in Tolkien's Lord Of The Rings

Apart from being an amateur astrophotographer, one of my passions is fantasy literature. Many authors wrote incredible books but, for sure, Tolkien is the most known and loved for his masterpieces: The Hobbit, The Lord of The Rings and The Silmarillion….the latter being my favourite.

Last summer, I decided to start reading the LOTR once again but in original language.

Close to the end, when I arrived to the chapter "Many Partings" in "The Return of the King" I focused my attention on the following paragraph.

The hobbits were on their trip back to the Shire and Aragorn was greeting them….

"....With that they parted, and it was then the time of sunset; and when after a while they turned and looked back, they saw the King of the West sitting upon his horse with his knights about him; and the falling Sun shone upon them and made all their harness to gleam like red gold, and the white mantle of Aragorn was turned to a flame. Then Aragorn took the green stone and held it up, and there came a green fire from his hand….."

This is a clear reference to the green flash: a photometeor that can happen when the Sun is close to the horizon or just below it. Suddenly a green light appears on the top border of the star or just upon the horizon where the Sun was few seconds before as a consequence of many factors like air turbulence and optical physic like dispersion, diffusion, selective absorption and so on.

Tolkien describes the moment of the greeting as happening during sun set: ...With that they parted, and it was then the time of sunset and also the falling Sun shone upon them...

Aragorn is clearly aligned with the setting sun, again:  ...and the falling Sun shone upon them...

The sun was red... so very close to horizon: ...their harness to gleam like red gold, and the white mantle of Aragorn was turned to a flame...

and finally the green flash happened: Then Aragorn took the green stone and held it up, and there came a green fire from his hand…..

This is clearly a reference to the green flash. Furthermore Tolkien used the following words: here came a green fire...he could have used the words green light. The word fire suggests me a stronger reference to the sun itself. The green flash appears not like a simple light but as an atmospheric distortion of the upper rim of sun disk coloured in green, much more similar to a flame than a simple light. 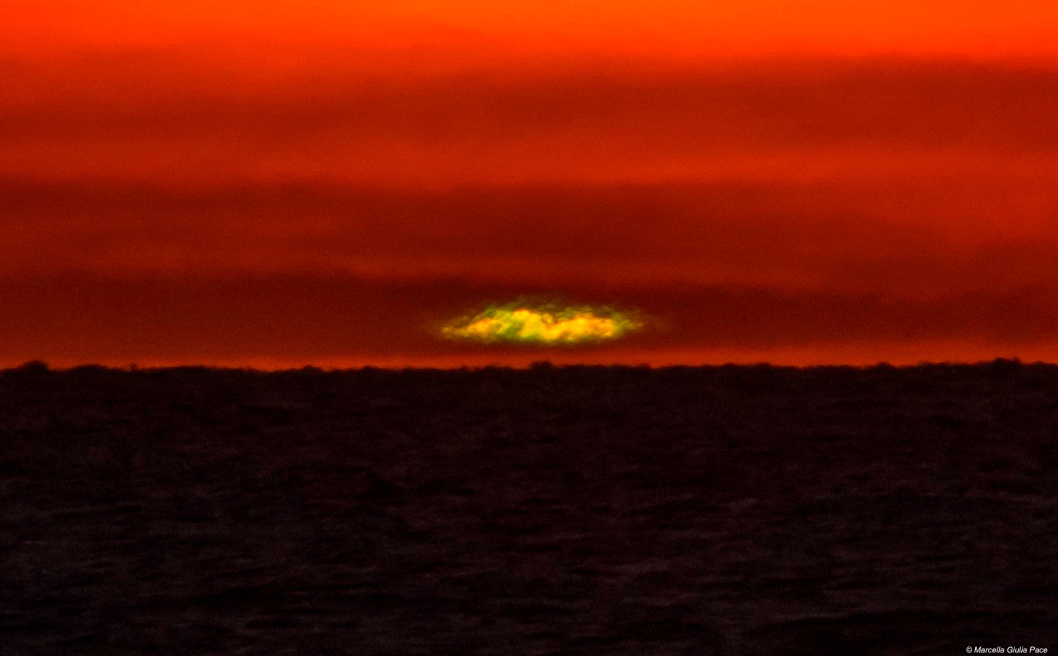 I found no other references on the net of this modest discovery. I hope that all Tolkien fans and astrophotographers will be intrigued by this small article.

Other information on Green Flash phenomena:

Nice C.(non-registered)
Hi Dario, I discovered by chance your site and the blog, and I was fascinated by the quality of the shots and videos, and by the passion they express.
There is a 1986 film by French director Eric Rohmer entitled "Le rayon Vert", winner of the Golden Lion in Venice, which mentions the novel of the same title by Verne (1882) and talks about the phenomenon, linking it with the legend that two people in love who see it together are bound by a special love.