The story of a shot.

It had been a long time since I was attracted by the idea of finding an evocative place in the countryside of Syracuse. The best choice always seemed to me the rocky necropolis of Pantalica. I found fascinating the idea to light on  the little encarved tombs from inside. I wanted to put the observer in the condition to feel the supernatural and enchanted dimension of that place. Unfortunately Pantalica is rich in tombs that are not easy accessible.

Recently I discovered another interesting place: the rocky necropolis of Castelluccio in the countryside of Noto – Syracuse whose  images and location are quite difficult to be found on internet, apart from the (prince tomb).

By chance I found this image:

It seemed a perfect place: many graves and easy accessible.

Where it was? Using Google map, Bing map, some references such as: trees, rocks and a road I understood where the place was.

On a Monday I decided to have a walk during the twilight togheter with a friend. The idea was to shoot some images in order to decide the best scene for the night shooting session.

The place was oriented toward south west not being the ideal landscape for a star trial since Polaris was not in the frame. After a couple of hours I had my three potential scenes (fig.1,2,3): 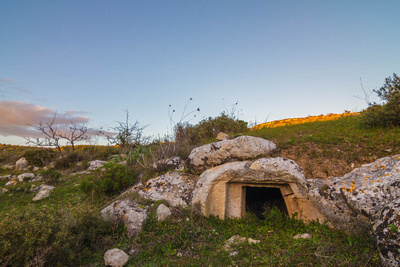 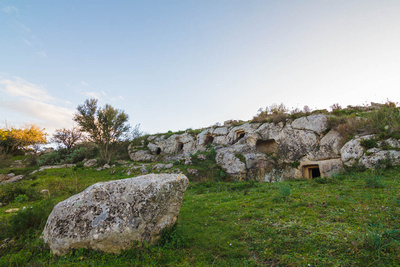 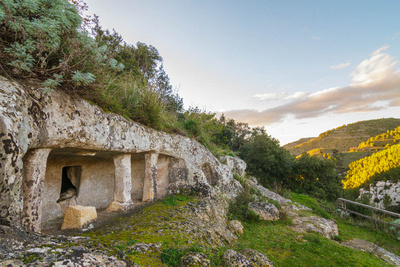 On Friday the 8th  of January, I went there again taking with me a mirror to focus the north star by leaning it upon the rock in fig.2.

I carried also: 2 cameras, 3 lens, 2 tripods, ambient lights, spare batteries, a falsh, 2 intervallometers, a backpack, dresses for cold weather and some food for the night.

Unfortunately soon after the sunset, some heavy cloud started to condense and I decided to come back to Syracuse empty-handed.

I returned to Castelluccio on Monday the 10th carrying the equipment through 400 mt of rock, small path and undergrowth...and I started my shooting session with the landscape of fig.1.

Then I went to the lawn in fig.2 and placed the mirror upon the rock (fig.4). 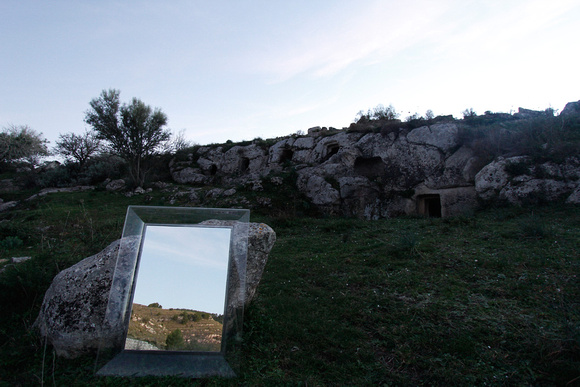 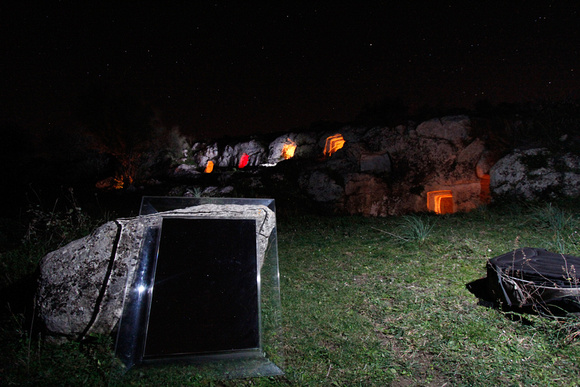 Once I finished this procedure I placed the ambient light inside and outside the graves ….45 minutes more…..checking from time to time in order to be sure that the exposition was in control.

In the end, I had to light up the grass using my flash. 30 minutes later I had my 16 shots for the foreground and I started my star trail sequence.

I was so tired that I made an unforgivable mistake:I left my camera at 3200 iso!!!!

Being alone, the night seemed not to pass: my car was really uncomfortable and cold seemed to enter from every rent in spite of my effort to warm the cabin living the car’s engine on.

Although the weather forecasts said that it should have been a cold but clear night, some low and dense clouds flowed over the scenes breaking the faint tracks of the stars.

At 3 am I decided to leave (too many clouds) spending other 40 minutes to carry back all the equipment and one hour more to come back home. 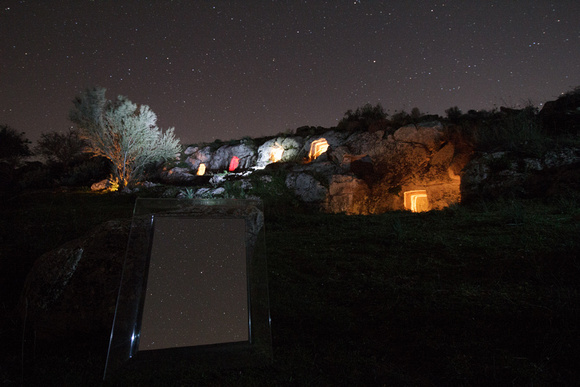 This is my first image that suffers of two big problems:

For this reason it was necessary to white balance the sky toward blue-cyan in order to cast a night blue shade. The reference was of course the rule of color correction a la Dan Margulis (Fig.7). 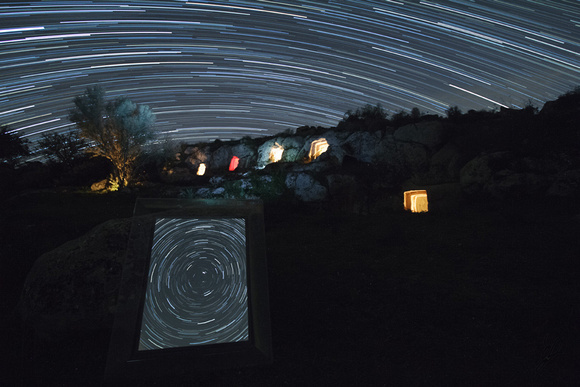 On the foreground the white balance was calibrated to have a believable green on the lawn. To reduce the noise by a factor of 4 I made an average of my first 16 shots, the ones enlighted by the flash light (fig.8). 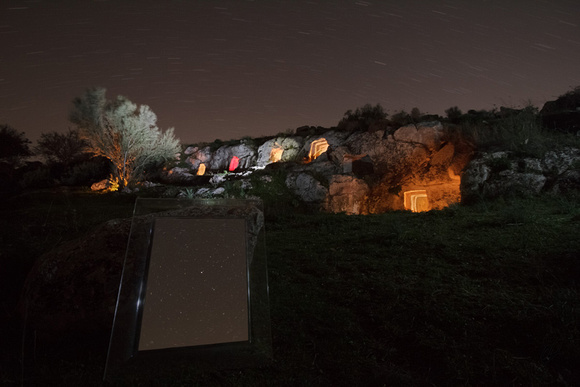 Some minor adjustment have been applied to recover the highlight in some graves and to open the most closed shadow. To do the last passage I applied a stronger noise reduction in ACR and blended the result with an inverted luminosity mask calibrated around the tones.

The sky and the foreground have been blended by means of a luminosity mask developed from the composite star trail shot with the darker foreground (fig.9). 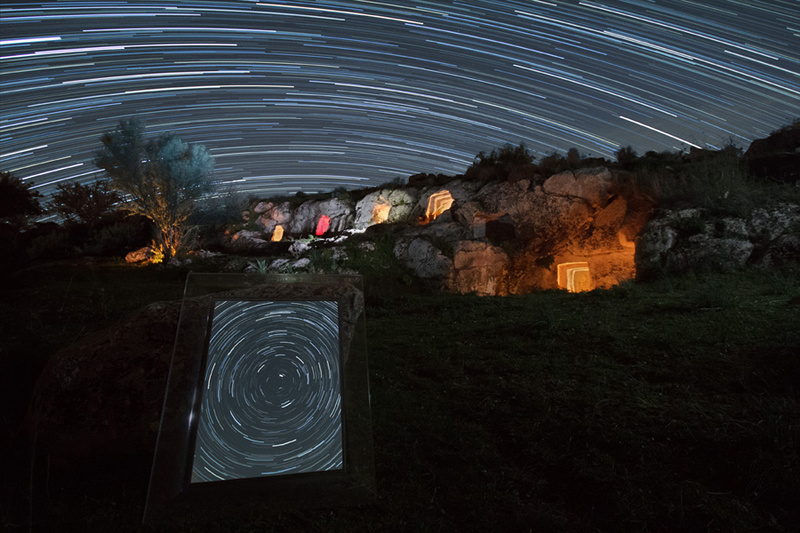 From this point I proceeded with some minor color correction adjustments, some contrast optimizations, a shadow/highlight passage before entering the Moder Man From Mars and Color boost (fig.10). 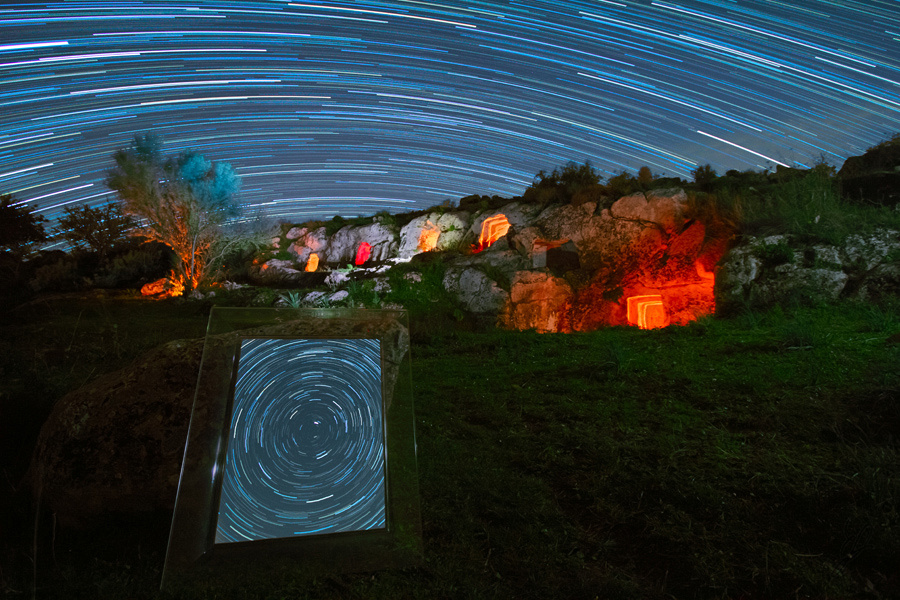 The image resulted in an important saturation mainly around the warm shades. The sky also needed to be brought back toward the reference.  Working around the opacity and using a mask developed from the inverted a channel, I ended in the image here under (fig.11). 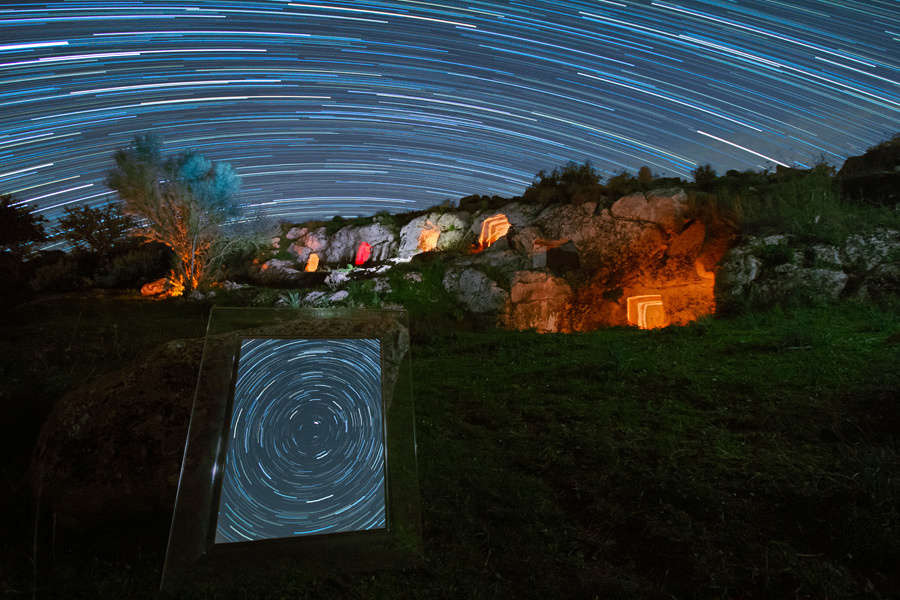 At this point the file was ready for a star trail improvement and an unsharpening mask for fine details and micro contrast as described in this tutorial:

6 hours traveling by car, 3 hours spent to find out the best scenes, 11 hours of star trail during the night, too much cold, 5 hours to create the star trail in PS as described in this article:

4 hours of post production, this is the final result: 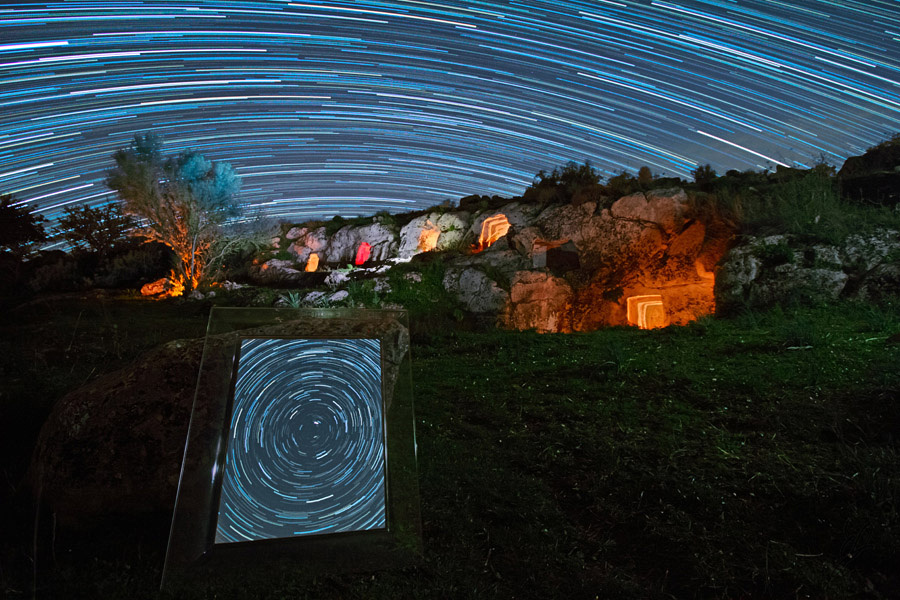 You can like or not the shot but I cannot not feel satisfied by the idea to have designed and realized this portrait. It wants to put attention on the supernatural dimension of this place (the enlighted tombs) that does not change with the time passing by (the star trail).

"...It often seems to me that the night is much more alive and richly coloured than the day..."