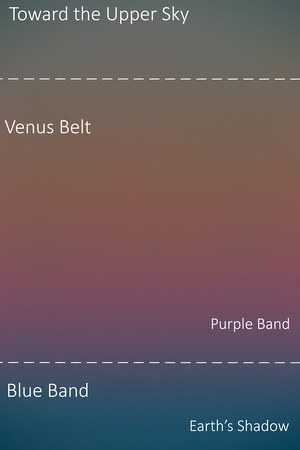 Antitiwilight Colors And Belt Of Venus

Generally speaking, twilight is sunlight scattered by the atmosphere that is visible when the Sun is below the horizon. In a dedicated paper, D.Lynch et al. describe a series of visual observations of the antitwilight made with the Sun moving beneath the observer horizon under “very clear or cloud-free” conditions. They name four principal visual components of the antitwilight:
•the blue “upper sky” (US) which extends downward from observer zenith;
•the reddish “Belt of Venus” (BV);
•the “blue band” (BB) which lies below the Belt of Venus and is part of the Earth’s shadow;
•the “horizon band” (HB) a band of sky lying between the blue band and the horizon, which, though it lies farther into Earth’s shadow, is slightly brighter than the blue band (not present in this image).