A small side-step from the main path

The tutorial "A colored Moon" described how to improve colors and luminosity when shooting at the full Moon.  If you follow every single step it would be easy to achieve more or less the same result I illustrated.

In that case, the Moon lived in the quarter of tone and was easy enough to apply a luminosity curve adding contrast only to the Moon but not to the background (fig.1) 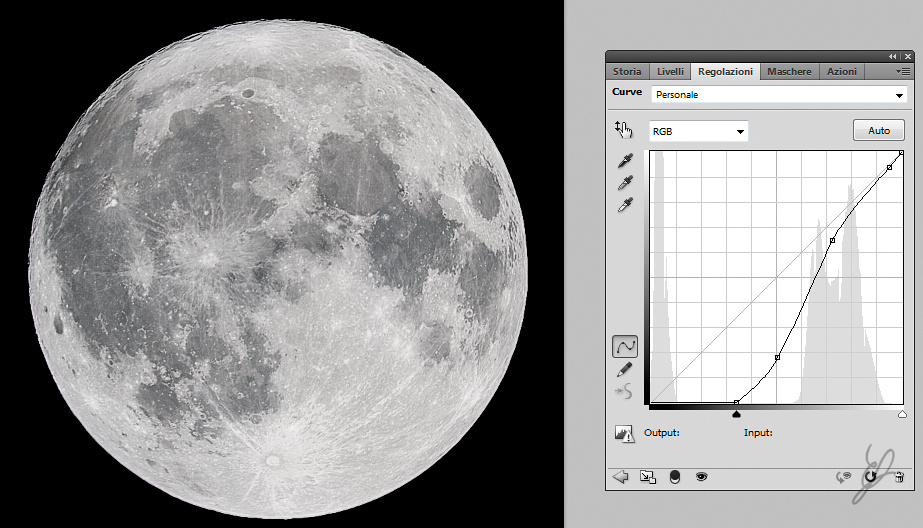 Infact, the background lives on the left side of the histogram and the Moon on the right side; nothing stays in the middle where the curve starts its effect (fig.1)

When you shoot at the a "not Full Moon", things get more difficult since the areas close to the terminator tends to get darker and darker until they fade into the background.

This means that it is not possible to isolate the sky from the Moon any more. As can be seen inside the red circle of fig.2, there is no gap between the dark pixels of the sky and the ones of the Moon. 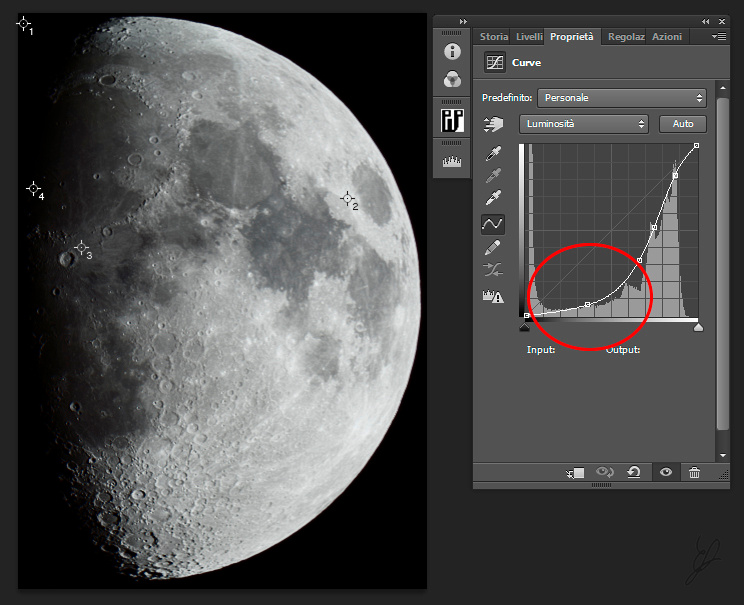 In this case, if we apply a "S" curve to reduce luminosity and to add contrast, as we have done in fig.1, there could be the risk to close the shadow and reduce the contrast losing a lot of important details (see fig.2 getting darker on the left side). Not to close the shadows means, in such a situation, not to move the shadow point. This will result also in a less deep curve in the 3/4 of tone (look at the curve inside the red circle of fig.2). We remember that: "the deepest the curve, the more the contrast!"...and vice versa.

Then, to achieve our goal, that is to increase the overall contrast without losing important details, we need to protect the darkest area with a mask.

It should be dark in the darkest area and light in the lightest area. Despite the fact that it could appear as a joke, this is the reason why we need a mask right from the luminosity channel whose result, along with the luminosity curve effect, can be seen in fig.3!!!! 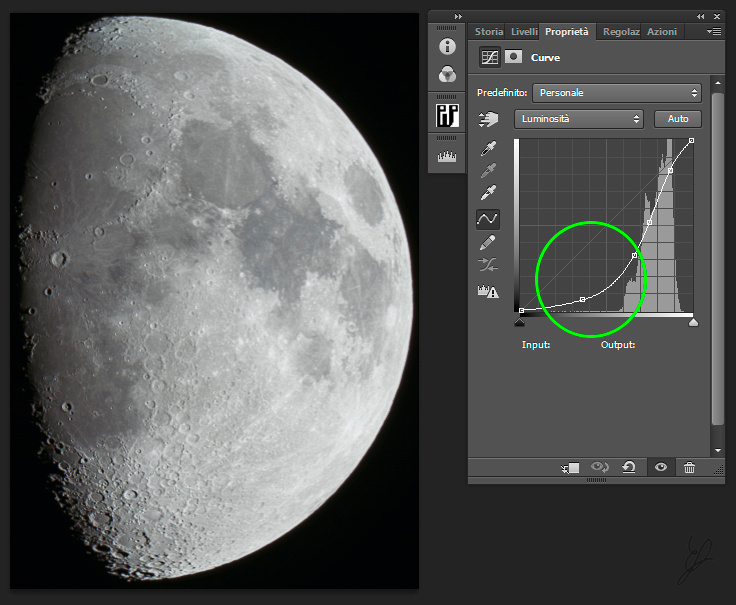 Now the overall contrast is improved but we have not lost details close to the terminator. Even the histogram (inside the green circle) show us that the curve will not modify the darkest areas.

At this point, we are ready for the Color Boost and MMM action of Dan Margulis's PPW and the result is shown here after removing the mask in the MMM color Layer and increasing the opacity up to 50% (fig.4). 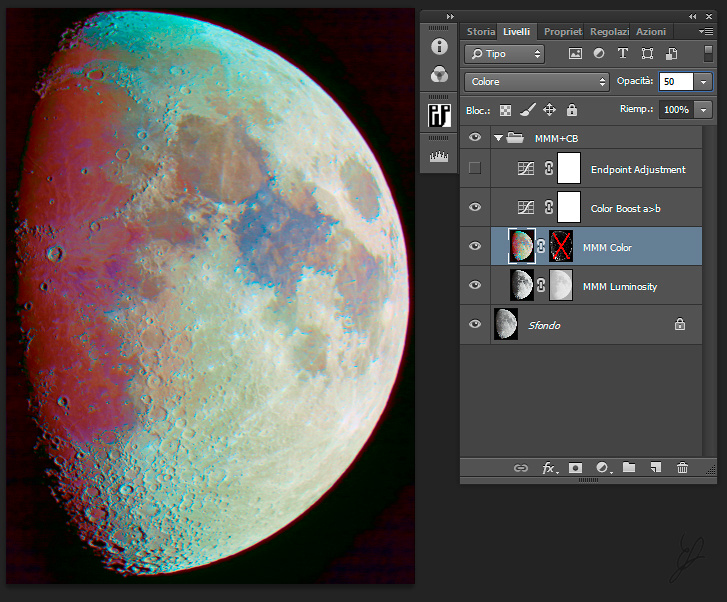 Moon MMM and CD fig.4Modern Man from Mars applied to the moon from dan Marguilis's PPW

Now we need a saturation mask to protect the "Moon" from this explosion of colors:

this is the final saturation mask (fig.5) which is dark where the saturation is higher: 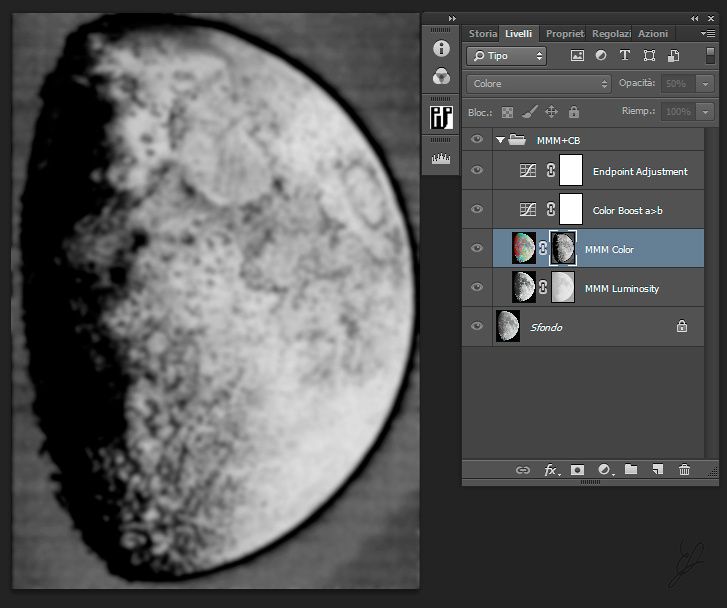 At this point, by moving the mask density, you can decide how much color and color variation should be applied in your workflow (fig.6). 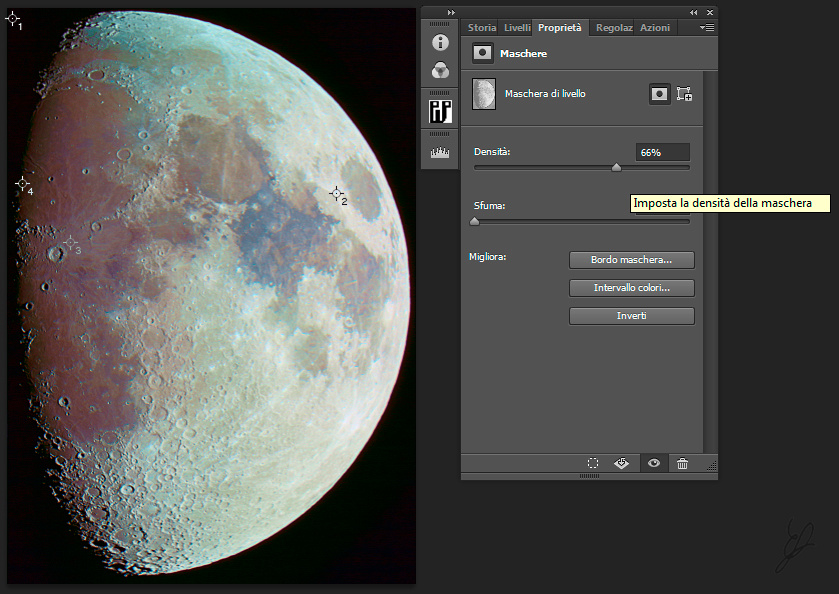 The Moon needs final adjustments such as: removing the cyanish halo, adjust the detail with unsharpening process and so on. This is already described in the first tutorial.