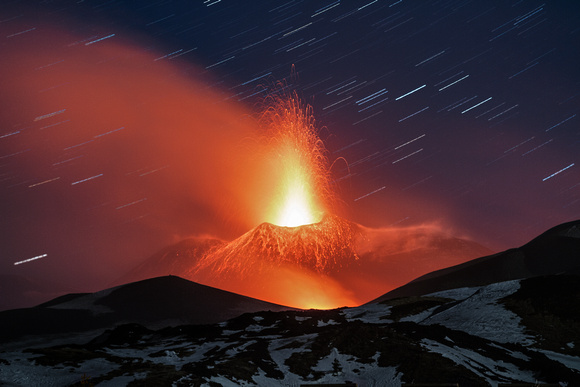 Sicily - March 2017, The Volcano Etna woke for the second time in a month.
According to Greek mythology, Hephaestus was the craftsman and smith of gods.
The ancient Greeks and Sicilians believed that he had his abode and his forge under the volcano Etna and that the eruptions were the proof of his mighty work.

From ct.ingv.it: "On the morning of 15 March 2017, a new eruptive episode started at Etna's Southeast Crater. The eruptive vent was located in the area of the former "saddle" between the southeast Crater (SEC) and the New Southeast Crater (NSEC). In the early morning hours of 15 March, a small lava flow started oozing down the south flank of the SEC-NSEC cone complex. Then the eruptive activity rapidly intensified with nearly constant Strombolian explosions that generated amounts of volcanic ash dispersed in the atmosphere. The lava flow had reached the base of the cone and was slowly expanding on the gently sloping terrain toward south.”

The landscape was enlightened by the gentle light of the Moon showing the “Sciara”, the black volcanic, rocks covered by a thick layer of snow.
From the top crater a fountain of lava left traces on the sky in front of a curtain of gentle lights pictured by the stars rotating around Polaris.
2014 2017 DARIO GIANNOBILE
User Agreement
Cancel
Continue